The signal of an original hand-held transmitter can be programmed on one of the three memory buttons 1. After this, the programmed memory button 1 will operate the system in question. The LED 2 flashes to confirm transmission of the signal.

If you sell your vehicle one day, delete the saved programs beforehand for your own security. To prevent possible damage or injury, before programming or using the integrated universal remote control, always inspect the immediate area to make certain that no people, animals or objects are within the travel range of the device. Also, comply with the safety precautions of the original hand-held transmitter.

If you see this symbol on the packaging or in the manual supplied with the original hand held transmitter, it is safe to assume that it is compatible with the integrated universal remote control.

Information is also provided on the Internet at:

www.bmwusa.com or www.homelink.com. HomeLink is a registered trademark of Johnson Controls, Inc. 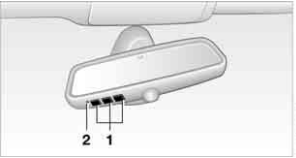 1 Switch on ignition
2 When using for the first time: press the left and right-hand memory button 1 for approx. 20 seconds until the LED 2 flashes quickly. All stored programs are deleted.
3 Hold the original hand-held transmitter at a distance of approx. 4 in/10 cm to 12 in/ 30 cm from the memory buttons 1.

4 Simultaneously press the transmit key on the original hand-held transmitter and the desired memory button 1 on the integrated universal remote control. The LED 2 flashes slowly at first. As soon as the LED 2 flashes rapidly, release both buttons. If the LED 2 does not flash rapidly after approx. 15 seconds, alter the distance and repeat the step.
5 To program other original hand-held transmitters, repeat steps 3 and 4.

The corresponding memory button 1 is now programmed with the signal of the original hand-held transmitter. You can operate the device when the engine is running or when the ignition is switched on.

To program the integrated universal remote control, consult the operating instructions for the equipment to be set. You will find information there on the possibilities for synchronization. When programming hand-held transmitters that employ an alternating code, please observe the following supplementary instructions:

Programming will be easier with the aid of a second person.

The corresponding memory button 1 is now programmed with the signal of the original hand-held transmitter. If you have any additional questions, please contact your BMW center.

Press the left and right-hand memory button 1 for approx. 20 seconds until the LED 2 flashes. All stored programs are deleted. Programs cannot be deleted individually.

Press the button. The glove compartment opens automatically and the lamps come on.

To prevent injury in the event of an accident while the vehicle is being driven, close the glove compartment immediately after
use.

Fold the cover up

Be sure that the flashlight is switched off when it is inserted into its socket. Failure to comply with this precaution could lead to overcharging and damage.

A storage compartment is located in the armrest between the front seats. This compartment is integrated into the central locking system and can also be locked separately using the hotel function.

Turn the key to the right, refer to illustration, until the key slot points in the direction of travel and then remove: The hotel function is activated after subsequent locking or unlocking of the vehicle. The system locks the luggage compartment lid and the compartment in the front center console and disconnects them from the central locking system.

To open the cover:
Pull the left button. The cover opens and can be folded upward. Depending on the version, the storage compartment can be equipped with a corresponding cradle* for the telephone or mobile phone.

A connection for an external audio device is located in the storage compartment. You can, for example, connect a CD player or an MP3 player, and play the sound via the vehicle loudspeakers.

The center armrest can be set in two positions.

Pull the right button:
Move the armrest upward or downward and lock it in the desired position.

To open, raise the cover at the left or right edge. The compartment contains the cup holder and the lock for the hotel function.

Other compartments and nets

Other compartments are provided in the doors as well as in the front center console*. Ticket pockets are located in the sun visors. Storage nets are located on the backrests of the front seats and in the passenger footwell*.

To prevent the risk of injury during an accident, do not stow hard or sharpedged items in the nets. Another storage space is located in the luggage compartment in the right side panel. If you wish, this is also suitable to store the onboard documentation.

To fold down, press at the top edge.

When hanging clothing on the hooks, ensure that it will not obstruct the driver’s vision. Do not hang heavy objects on the hooks. If you do so, they could cause personal injury to occupants during braking or evasive maneuvers.

The compartment of the rear center console contains a built-in cup holder and a removable one.

The removable cup holder can be inserted into the side of the center console.

Press the opened cover beyond the resistance point, refer to arrow: the ashtray lifts up for removal.

Press in the lighter with the engine running or the ignition switched on. The lighter can be removed as soon as it pops back out.

Hold or touch the hot cigarette lighter by the knob only. Holding or touching it in other areas could result in burns. Always take along the remote control when you leave the vehicle; otherwise, children could, for example, use the lighter and burn themselves.

With the engine running or the ignition switched on, the cigarette lighter socket can be used as a power outlet for hand flashlights, car vacuum cleaners, etc., with power ratings of up to approx. 200 W at 12 V. Avoid damaging the socket by inserting plugs of different shapes or sizes.

It permits safe and clean transport of up to two pairs of standard skis or one snowboard. You can use the ski bag to stow skis up to 6.9 ft/ 2.10 m long. 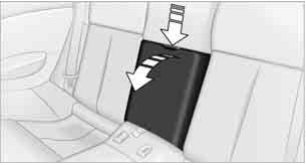 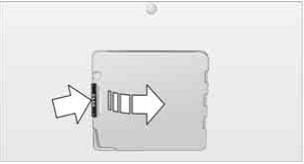 4 Open the loading flap and use the magnetic holder to secure it to the rear panel.

To stow the ski bag, perform the above steps in reverse order. Only stow clean skis in the ski bag. Wrap sharp edges so that no damage occurs.

After loading, secure the ski bag and its contents. To do so, tighten the retaining belt at the buckle.

Secure the ski bag in this way. If you fail to do so, it could move around and endanger occupants during braking or evasive maneuvers.